Lefty is the Master of the Web of Polymorph want a cracker?. He does the B-Movie reviews, transcribes and choreographs conversations between Gumhead and Fishguy, writes and directs the TRIPEMAN!!! Comic strip, and almost everything else. From the page's humble beginnings as a weird-event listing thingie on XOOM in November of 1998, to its present existence, straddling Tug Internet Services and XOOM for its various features, the page has gotten less small.

Lefty's hobbies include B-movies, the Nintendo Entertainment System, nihilism, inane comic fun, pinball, and pretending he's obsessed with Dom De Louise, Dave Thomas (founder of Wendy's) and Don Rickles. He has two ears, placed on either side of his head for convenience, and two eyes with which he attains binocular vision. He has a bachelor's degree and life. 'Pop Goes the World', by Men Without Hats, just came on the radio, which appears to have confused him immeasurably.

Lefty's hat size is 7.5". He likes to eat pizza or a nice Salisbury stake with ketchup, a pickle and perhaps some red onions. He enjoys Big Red soda for its novelty, despite its taste. One of the pieces of knowledge he picked up in college, of which he is most proud, is this tip on making toast. Read it now, & save thousands of dollars!

This paragraph has been right-justified for no discernible reason.

Lefty really has more things flying out of his head than he has time to deal with, so the updates may be sporadic. Why not let us know & we'll see what we can do. 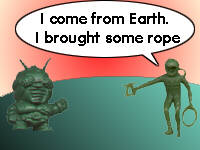 Back to Polymorph want a cracker?